You are here: Home » Articles » The Year On The North West Coast

Houses typical of the Salish peoples. These are at Squamish.

Here at Walker Goldsmiths we are about a block from the beach and very aware of the changing weather and the revolving of the seasons. Our house and studio is situated where the rear of the last Lummi Longhouse was positioned. The local museum even has a photograph of that house. I thought it would be fun to go through a year, month by month, and write about what would have been happening three or four hundred years ago, not just here, but up and down the North West Coast. There are a lot of cultural differences between the Salish Sea and Yakutat but there are also many similarities, the ecosystem is basically the same so the activities are basically the same.

January is when all the hard work of summer pays off. It is cold, rainy, and gray, all the leaves are gone from the alders and maples and even the berry bushes look dead. What else can you do besides feast and party? Of course the Potlatch was not a party at all, it is part of the fabric that holds a culture together; the dead are memorialized, marriages are solemnized, names are validated and property is exchanged. In addition to the Potlatch and all that it did there were other winter ceremonials, and secret societies held initiations. There is the Hamatsa in Kwakwakewak country and the black paint society and seowin in Salish country. There were the whaler’s societies in those groups that hunted whales, there were also the training and establishment of spirit doctors. The number one activity for January we would call school. Telling stories that taught a moral or a behavior that each member of a culture needed to know to be a good person in that culture. Stories were not just narrated around the fire in the evening but were also danced and illustrated by masks and costumes.

There was still a lot of work being done preparing food and keeping the fires burning and enough firewood around. Think about the firewood for a moment. No chain saws, no saws at all, yet a big house might have two or even three fires going when it got really cold. One fire was usually enough to keep everyone warm enough and do the cooking for even a large group. If you got a big log it had to be split up and broken into manageable pieces. I imagine that the smaller firewood would disappear pretty fast all around a house. Mother Nature would replace driftwood quite often so that would be a major resource. There was water to be hauled and all the day to day chores, but very little food gathering was being done, perhaps some clam digging and a little fishing for rock fish or halibut, but not much as the weather is often violent this time of year and always cold and miserable.

This was a great time to sit by the fire and make tools and weapons. Masks were carved, clothing made from the cedar bark that was gathered in the spring and the hides that were cured in summer, boxes were bent and painted, canoes carved, points were flaked, adz blades were ground, yarn was spun and blankets woven. Bone and antler was split and ground for fish spears, herring rakes, blanket pins, wedges and other tools. No one was idle even though this was the time for cultural activities like the Potlatch and there were days even weeks of feasting and dancing and singing with your neighbors. Life was hard and it took everyone’s labor for the group to thrive here in the great North Wet! 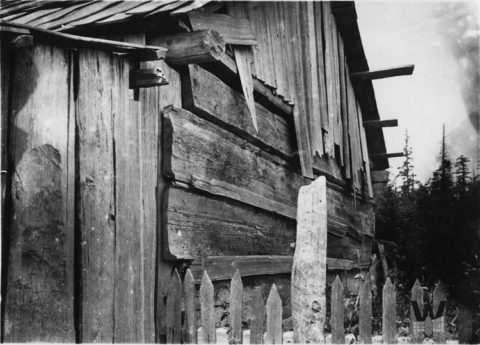 A Salish house this one was at Lummi

This house was at Lummi but is not the house that sat where my house is. I have not been able to locate that image but when I do I will add it on in another postlet. As I find good images of other styles of houses I will post them here.

Have been pursuing North West Coast history and culture for many years and enjoy it very much. ... more by Owen Walker »

One Response to “The Year On The North West Coast”